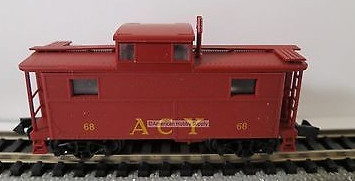 The ACY finished their 10 mile line between Mogadore and Akron, Ohio in 1912. In 1920 a big opportunity presented itself as New York Central began selling off a number of subsidiaries to avoid running afoul of anti-trust laws. One of these subsidiaries the Lake Erie & Western had controlled the Northern Ohio Railway which ran from Akron to Delphos, Ohio. The NO was leased to ACY, even though it was 16 times the size of the ACY. They operated under the ACY flag and in 1944 the two merged. They never did reach Canton or Youngstown. The ACY was best known for serving the tire and rubber industry in the Akron area. Passenger service was a bit of an afterthought with the last mixed train operating in 1951.

The heaviest power in the steam fleet were USRA light Mikados, at least one of which was equipped with a tender booster. Their diesel fleet (about 18 locomotives give or take) was a bit odd. Their switchers were all Alco and their road power was all Fairbanks Morse. The FMs were setup to run long hood forward. In 1964, the AC&Y was purchased by the Norfolk & Western as part of the N&W-NKP-Wabash-P&WV-AC&Y consolidation. Unlike the other roads, the N&W kept the AC&Y as a separate operation.

By 1970, all of AC&Y's Alcos and FMs had worn out and had been traded in to EMD. However, they were traded in for new locomotives for AC&Y's parent, Norfolk & Western. N&W then leased older power (mostly ex-Nickel Plate GP-9s) to AC&Y. At that point, the only way to tell you were seeing an AC&Y train was "Leased to AC&Y" painted in small letters below the road number on N&W geeps. Finally, the AC&Y was merged into the Norfolk & Western in 1982 in preparation for the Norfolk Southern merger.