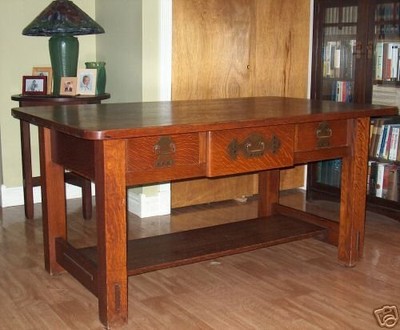 Albert and John George were two of the five Stickley brothers who made furniture in the United States. All came from a furniture manufacturing background, and had worked together in an earlier company also named Stickley Brothers Furniture Co., that had operated in upstate New York under brothers Gustav, Albert, and Charles. Brothers Gustav and Leopold opened their own company, United Crafts, in 1899. Gustav eventually opened Craftsman Workshops, and became one of the leading proponents of the Arts and Crafts Movement in America. John George left Stickley Brothers and Grand Rapids in 1900, and in 1902 co-founded the L. and J.G. Stickley Furniture Co. in New York with brother Leopold. Albert remained the head of the Stickley Brothers Furniture Co. in Grand Rapids until his death in 1928.

During its early period of production, Stickley Brothers amassed a notable list of craftsmen and designers. The company employed Italian carver Leopold Baillot for three years prior to the introduction of its Mission lines around 1900. Timothy Conti produced marquetry for several of Stickley Brothers? early Arts and Crafts lines, and operated his business (T.A. Conti and Co.) out of the Stickley Brothers? factory. Forrest Mann likely trained some of Stickley Brothers? Turkish and Russian copper artisans, and may have also produced some of their hand-wrought hardware designs. James M. Seino headed Stickley Brothers? decorative painting department from 1914 through 1938. He received his training from the Imperial Academy in Tokyo, and studied art in Paris and New York before becoming the first Japanese resident of Grand Rapids. David Robertson Smith served as Stickley Brothers? staff designer between 1902 and 1915, overseeing most of their Mission lines. Arthur Teal served as staff designer from 1908 to 1911, and again from 1920 to 1924, and 1927 to 1936.