Collectors value this item at an average of 4.79 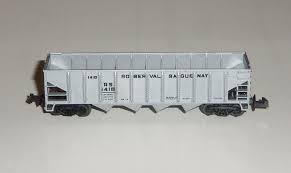 Model Information: Roco made 2 different 4-bay open hopper N Scale models in the late 1960s/early 1970s. This one is the rib-side version and the other one is an offset side. At first glance, it is fairly easy to confuse the two. The rib-side versions were made for AHM specifically and were stamped 'AHM Austria' on the bottom. They were later imported for a brief time by another company called JC Timmer in CP paint schemes. Walthers also imported these with Roco branded boxes. I have to assume that the stamping on the JC Timmer and Roco versions do NOT say 'AHM Austria' on the bottom.

Overall it is a pretty nice tooling for its time. The molded details are quite fine and even include rivet patterns on the interior. I have seen 3rd generation models with less detail inside the cargo area. The AHM versions have blackened metal wheels whereas the JC Timmer and Roco versions have nickel-silver plated wheels. The couplers are truck mounted (no surprise given the age of this tooling).

This line is often referred to as Roberval & Saguenay but you wonât find the & anywhere on an RS locomotive or car. The RS was launched in 1911 to build from a connection with the Quebec & Lake St. John Railway in Roberval, Quebec, around Lake St. John to Chicoutimi with a branch to St. Bruno. The line was owned by the Chicoutimi Pulp Company. In 1914, RS acquired the Ha! Ha! Bay Railway that ran from Jonquieres to Bagotville plus branches. A portion of the line was under trolley wire with steeple cab switchers moving the freight while steam was used on the rest of the system. RS settled in hauling forest products until the owners closed the mills in 1925.

A predecessor of Alcan bought the railroad to move raw material and finished products from their new aluminum smelters in Arvida. In 1929 the line was extended from Arvida northwest to a connection near LâAscension. In 1974, the Alma & Jonquires Railway (also owned by Alcan) was merged into the RS.

Traffic today is dominated by raw material to and finished products from the aluminum smelters plus some forest products. A recent locomotive roster includes an S2, two RS-18âs, two RS-3âs, an RS-11, a C420, two B23-7âs, eight GP38-3âs and three SD70Aceâs.