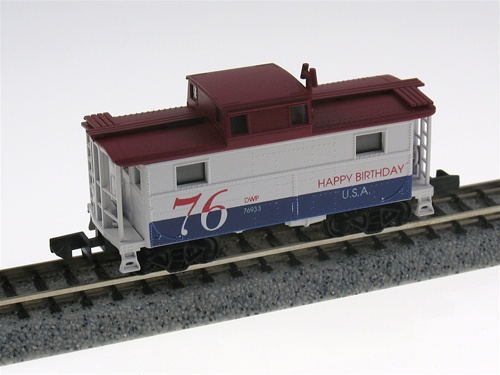 The DW&P was the result of the 1909 reorganization of the Duluth Rainy Lake & Winnipeg Railway. Under the control of the Canadian Northern, the DW&P completed their 167 mile line from Duluth, Minnesota, northwest to Fort Frances, Ontario on the U.S.-Canada border in 1912. At Fort Frances they connected with CNorâs mainline between Winnipeg and Thunder Bay. Canadian Northern became part of Canadian National in 1918 and control of DW&P passed to them at that time.

Their largest steam locomotive was a single 2-8-2. Most of the steam fleet consisted of 2-8-0s. The diesel fleet has run from a dozen to a dozen and a half units over the years. They have only had 4 models in the fleet â ever: RS-11âs (which were delivered with a long-hood-forward configuration like parent CN), SD40âs, GP38-2âs and a single NW2. Yes, DW&P was another railroad to have never bought a cab unit. The first diesel paint scheme was essentially the same as Canadian Nationalâs from the same period, green and gold with black lettering. In 1960, CN turned to black with red ends and big white noodle logos. Although DW&P went with the paint color, apparently you just canât boil a noodle long enough to spell âDW&Pâ so they went with simple gothic initials instead. Later, they adopted CNâs black and red with big diagonal white bands on the long hood. Later, DW&P went to solid Morency Orange with white frame stripe. Then DW&P ownership was transferred to CNâs US holding company Grand Trunk Corporation. At this point they began painting their engines blue with red ends such as that used on Grand Trunk Western..

The 1995 privitization of Canadian National brought the absorbtion of operations and the separate identities for GTW and DW&P (CV had been spun off.) Duluth Winnipeg & Pacific, known by locals as âThe Pegâ, is now a paper railroad and it is fairly common to see CN cars with DWP reporting marks.