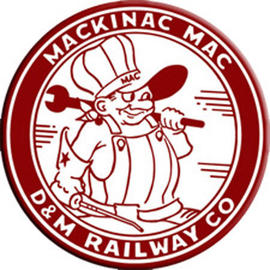 First of all, Mackinac is pronounced âMACKinaw.â The Mackinac region is where Lake Superior and Lake Huron meet. Some towns in the region spell it with a W but not the D&M.

The D&M was established in 1894 as part of the reorganization of the Detroit Bay City & Alpena Railroad. The D&M ran from Cheboygan to Bay City and La Rocque plus branches, all in Michiganâs lower peninsula. The total mileage was 348, making it nearly as big as cross-lake neighbor Duluth Missabe & Iron Range. D&M had picked up some former Penn Central lines excluded from Conrail but service ended in 1990 on those routes. Traffic was primarily forest products and aggregates. In addition to connections on the southern end of the D&M, they interchanged with the Duluth South Shore & Atlantic (later SOO) on the Upper Peninsula via car ferry from Bay City across the Straights of Mackinac.

D&Mâs diesel roster (around 12 units) was almost entirely Alco. They also had about 1200 freight cars. Their logo had a cartoon of an engineer named Mackinac Mac holding a wrench. The Detroit & Mackinac flag fell in 1992 when the owners sold it to a new railroad, Lake State Railway.