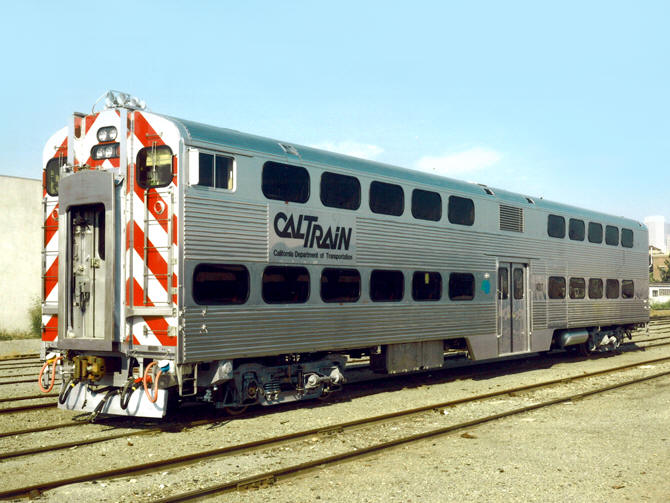 History: The 85 foot Bi-Level "Gallery" commuter car continues to be a favorite design of many commuter rail agencies throughout the United States and Canada. The design made its debut on the Chicago & North Western railroad for their Chicago area commuter service in the 1950s.

The big and beautiful looking gallery-type passenger cars were developed to enforce the commuter transportation rules of Caltrans, a 50 mile railroad from San Francisco to San Jose. These modern Bi-level coaches carry a large number of riders in comfort. Their universal design of cab car/passenger car offers easy maintenance, cost reduction, and compatibility with AMTRAK coaches. In order to make US officials happy. these cars adopt a large portion of their parts from US manufacturers. Furthermore, final assembly takes place in the U.S. Hence they satisfy the provisions of the 'Buy America' act.

Nippon Sharyo, Ltd. (æ¥æ¬è»è¼è£½é æ ªå¼ä¼ç¤¾ Nippon SharyÅ SeizÅ Kabushiki-gaisha, literally "Japan Vehicles Manufacture Company"), (TYO: 7102), formed in 1896, is a major rolling stock manufacturer based in Nagoya, Japan. In 1996, it abbreviated its name to "æ¥æ¬è»ä¸¡" Nippon SharyÅ. Its shortest abbreviation is Nissha "æ¥è»". It was a listed company on Nikkei 225 until 2004. It is listed on the Tokyo Stock Exchange and Nagoya Stock Exchange as ticker 7102. In 2008, Central Japan Railway Company (JR Central) became the majority shareholder (50.1%) of the financially struggling Nippon Sharyo making the firm a "consolidated subsidiary" of JR Central. In July 2012 Nippon Sharyo USA started production in their new facility in Rochelle, Illinois.