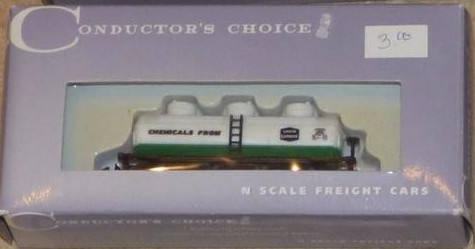 Specific Item Information: LIFE-LIKE MADE IN CHINA molded on bottom.


Model Information: These models were made in China for Life-Like by Sanda Kan. They were also imported by Industrial Rail. The tooling is derived from the earlier Mehano tooling from the late 1960s. They have nickel-silver plated deep flange wheels and Rapido Couplers.

Triple Dome tank cars, while not as common as single-domes, are a railroad staple. They have been around since the first half of the 20th century. A three dome tank car handled three different products, so in a sense a multiple dome tank car was shipping less than carload lots of a product. They carry multiple commodities or the same commodity for different destinations. LCL business eventually was lost to trucks.

Union Carbide Corporation is a wholly owned subsidiary (since 2001) of Dow Chemical Company. It currently employs more than 2,400 people.[2] Union Carbide produces chemicals and polymers that undergo one or more further conversions by customers before reaching consumers. Some are high-volume commodities and others are specialty products meeting the needs of smaller markets. Markets served include paints and coatings, packaging, wire and cable, household products, personal care, pharmaceuticals, automotive, textiles, agriculture, and oil and gas. The company is a former component of the Dow Jones Industrial Average. Union Carbide was 50.9% stakeholder in Union Carbide India Limited, the company responsible for the Bhopal disaster.

Founded in 1917, the company's researchers developed an economical way to make ethylene from natural gas liquids, such as ethane and propane, giving birth to the modern petrochemical industry. Before divesting them, the chemical giant owned consumer products Eveready and Energizer batteries, Glad bags and wraps, Simoniz car wax, and Prestone antifreeze. The company divested other businesses before being acquired by Dow Chemical on February 6, 2001, including electronic chemicals, polyurethane intermediates, industrial gases and carbon products.


Brand/Importer Information: Imports Life-Like branded cars in their own packaging.