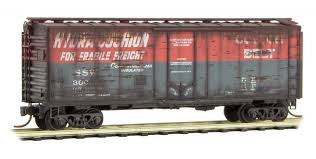 
Specific Item Information: These 40â standard box cars with plug door and red with grey lower band and white lettering run on Roller Bearing trucks. Built in 1959, these unique 25 Compartmentizer-equipped cars wore an experimental paint scheme similar to the red and grey paint scheme of Southern Pacific diesels. Ultimately vetoed by management for use on freight cars, these cars continued to wear this paint for years to come.