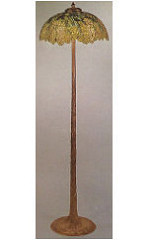 
Long Description: Small floor stand with twisted vine stem and base finished in gold dore. The base sits flat on the floor and 24 vine-like ridges twist up the stem, flattening and thinning as they approach the top. This base is a great example of Art Nouveau design with the plant stem design on the base rooted to the floor supporting a lifelike floral shade.