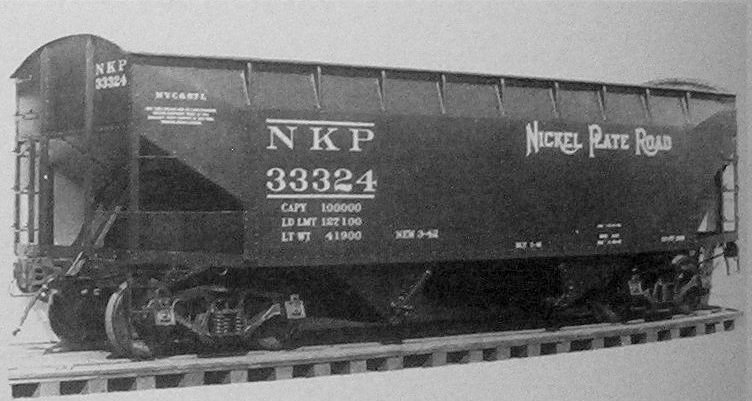 History: The late 1920s saw the introduction of the AAR standard âoffset-sideâ 50- and 70-ton hoppers. The design went through several variations in the late 1920s and early 1930s before settling on two versions of the 50-ton car and one 3-bay, 70-ton car in 1935. Most roads went for the AAR standard designs, but the N&W, VGN, and Pennsy were notable holdouts. World War II brought the famous âwar emergencyâ hoppers (only the N&W and MP bought the 70-ton version) and several composite versions of existing designs. After the war, AC&F found some brief success with a welded outside-stake hopper design, but the weld joints broke under the stress of loading and unloading rather than flexing like riveted joints. The offset-side design also had problems: the inside stakes were more prone to corrosion, and they suffered worse from loading and unloading stress than outside-staked hoppers. The design waned in the 1950s and was all but abandoned for new cars by 1960. Some roads (notably the C&O, the B&O, and the L&N) made the best of a bad situation by rebuilding their offset-side cars with all new outside-staked sides in the late 1950s and early 1960s.