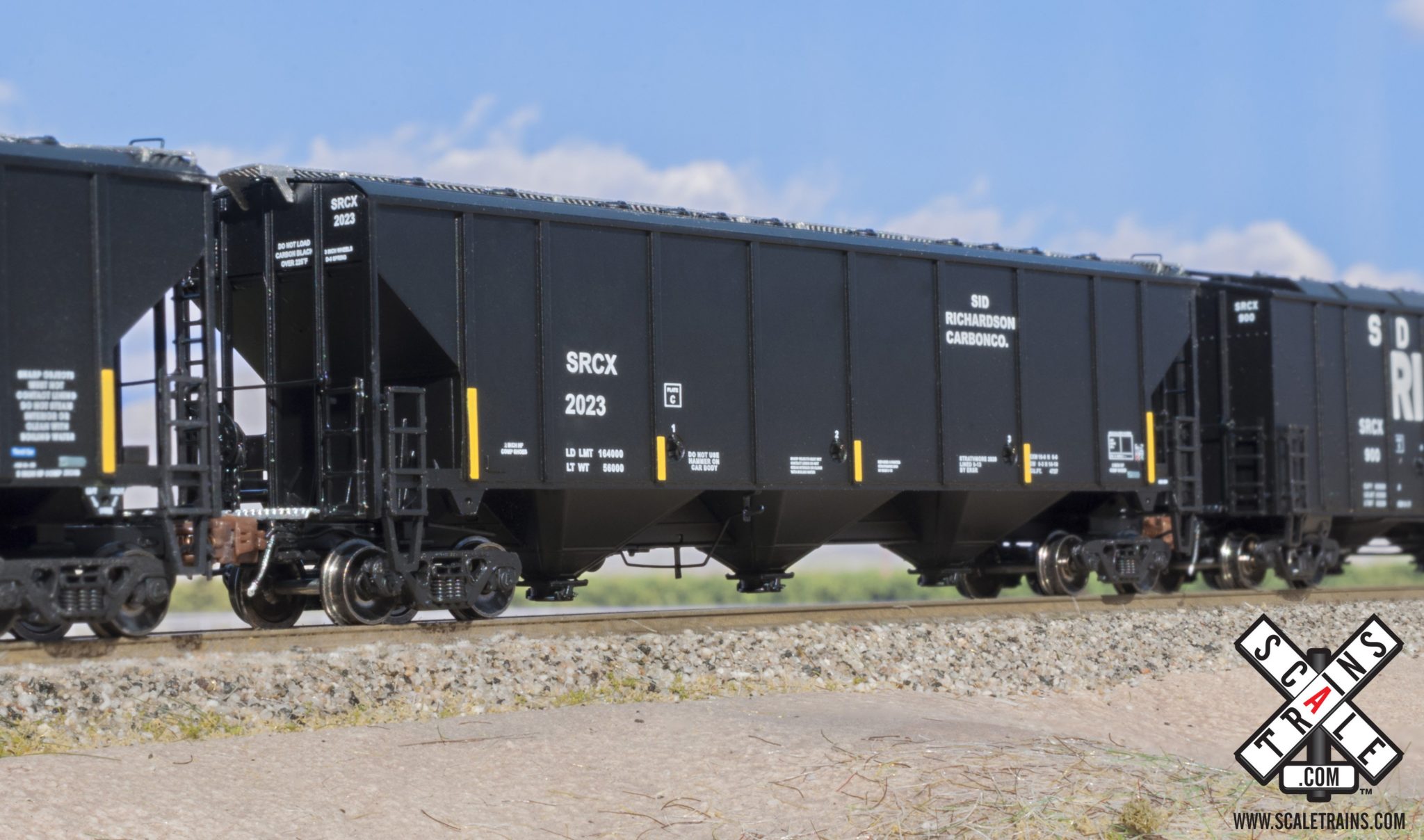 Model Information: This model was announced by ScaleTrains.com in mid-2017 and first delivered in March of 2018. ScaleTrains.com is the first manufacturer to offer N Scale scale plastic models of contemporary Thrall 5750 cubic foot and Thrall 4727 cubic foot carbon black covered hoppers. The 4727 is appropriate for the 1990s to today. The prototype was painstakingly researched from field documentation, photographs, reference books, and builder drawings. A TroveStar review of this model can be found here.

These cars operate with a minimum track radiusof 9 Â¾â, but operate best when the track radius: 11â or more. The cars will operate on Code 55 and 70 rail.

Found throughout North America, these unique freight cars are commonly found in large groups near major carbon black producers or users. They can also be seen singularly or in small blocks of cars in mixed freight trains. Both prototypes were painstakingly researched from field documentation, photographs, reference books, and builder drawings.

In 1992, Thrall introduced the 4727 cubic foot carbon black covered hopper. In contrast with the boxy 5750cf design, this newer design more closely resembles traditional covered hoppers. Similar in appearance to âhigh-hipâ grain hoppers, these cars featured three bays, external posts, and âopenâ ends with visible slope sheets. Common with their larger 5750cf cousins, these 70-ton cars feature âbutterflyâ outlets, multiple round loading hatches on the car roof (22 or 28 depending upon customer specifications), and sampling spigots mounted into small indents in the car sides. Many of these cars are still in service today.

A byproduct of the petrochemical refining industry, carbon black is a fine, powdery substance with a consistency sometimes described as being akin to soot. Deep black in color, one of its major consumers is the automotive industry, where itâs used as filler in tires, belts, and other rubber products. It also sees usage as a pigment in inks, paints, and plastic products, all of which make it a popular commodity with a variety of industries. Hauling it, however, can be challenging thanks to its physical properties. Covered hoppers are typically used to handle carbon black, with unique designs dating back to the 1920s. Reference: Carbon Black Cars: Freight Cars Journal Monograph #15 by Eric A. Neubauer, ISSN 0884-027X, 1990

Sid W. Richardson, a successful oil wildcatter with wells in Texas, New Mexico, and Louisiana, founded Sid Richardson Company in 1947 to enhance the value of his newly discovered Keystone Gas Field in West Texas. A year later he formed Sid Richardson Carbon and Gasoline Co. when he purchased a channel black plant in Odessa, Texas. In partnership with his nephew, Perry R. Bass, he began a sustained period of expansion. While the Odessa plant eventually closed, the company became a leading manufacturer of oil furnace carbon black by building plants in Big Spring, Texas (1961) and Addis, Louisiana (1968). This was followed by the purchase of the Borger, Texas plant (1986). In addition to these manufacturing facilities, a research center was built in Fort Worth, Texas (1972) and a pilot plant in Big Spring, Texas (1982). Sales, Customer Service and Technical Service are located in Akron, Ohio. Corporate headquarters are located in downtown Fort Worth, Texas.

Sid Richardson Carbon & Energy Co. has demonstrated a proven record of steady and successful growth through continued expansion and process/product improvement. Two of the manufacturing facilities produce 55 MW of electricity through cogeneration and exports approximately 50% to the deregulated market. Today, the company provides an annual production capacity in excess of 970 million pounds (440 thousand metric tons) of furnace carbon black, including over 40 grades of ASTM and specialty carbon blacks to more than 80 companies.