Collectors value this item at an average of 88.00 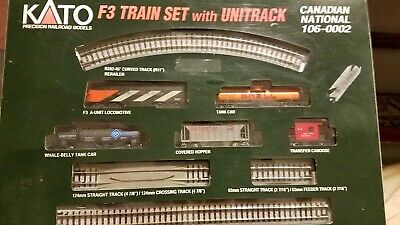 Specific Item Information: The F3A ph2 and Mixed Freight starter set includes Kato USA's powerful four-axle freight locomotive and an assortment of four specially decorated mixed freight cars (two tanks cars, one hopper, and one transfer caboose), along with a complete 2'x4' Oval of Kato UNITRACK with re-railing track, and a starter guide. Everything you need to begin building an N gauge train layout at home!