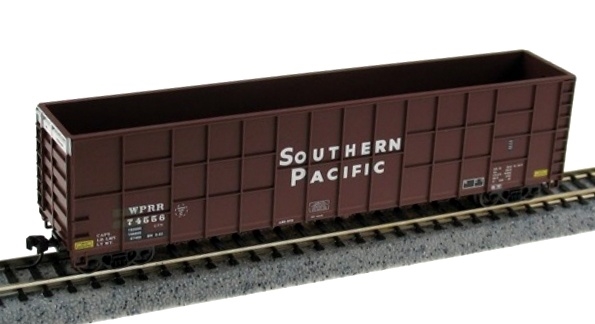 Specific Item Information: Oregon shortline Willamette and Pacific acquired these cars from Southern Pacific. Willamette and Pacific is part of the Genesee and Wyoming family of shortlines. Traffic is primarily forest and paper products, scrap, and steel. These cars are simple patch jobs. There are 4 different road numbers in this run. It includes 2 patch variations but each car is slightly different in data placement.


Model Information: This model comes in both "Smoothside" and "Shallow-Rib" variations.

Although they are one of the lightest loads carried by rail, they require one of the biggest cars! Wood chips are big business for today's saw mills and lumber operations. Once burned as scrap or fuel-on-site, these by-products of the lumber industry are purchased by paper companies and used to make paper.

Specially designed for the pulp and paper industry, these cars can hold up to 6,800 cubic feet of pulpwood chips. Open-top gondolas without doors, end doors or bottom gates are designed for top loading. Unloading can be performed by top, end or bottom, depending on car design.