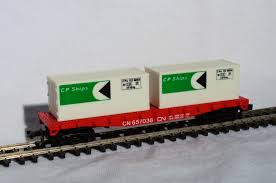 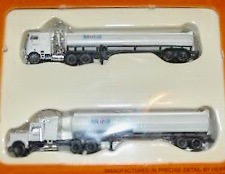 Specific Item Information: Car came with two 20 Foot CP Containers. Bottom of car shows no manufacturing information which usually means it is the Chinese made version.


Model Information: This body style was made in China for Model Power. It is a knock-off of the Lima 40 foot flatcar which was imported by AHM, MRC, PMI as well as Model Power. You can spot the difference by checking to see if "Lima" is stamped on the bottom. The Chinese made models also have wonky clips holding the trucks in place instead of the ubiquitous "Kingpin". The model measures 3.43" long so it comes in at over 45 scale feet but nowhere close to the advertised 50 feet in Model Power catalogs and marketing material.