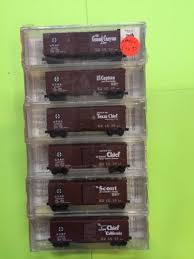 Model Information: Unlike many other Atlas releases from the 1960's, the Atlas 50 Foot Flatcar was actually produced by Atlas in the United States at their New Jersey facility. This model was first announced in the 1967 catalog with two road names with two Piggyback trailers permanently affixed to the car (TOFC). The two models first appeared for sale in the 1969 catalog at $2.50 each. The 1969 catalog shows two different road names and that is all that was available for 20 years. In 1988, a large new release appears with two dozen road names in two configurations: single 40 foot trailers and twin 24 foot trailers.