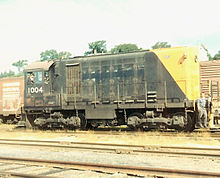 The Portland Terminal Company (reporting mark PTM) was a terminal railroad notable for its control of switching (shunting) activity for the Maine Central Railroad (MEC) and Boston & Maine (B&M) railroads in the Maine cities of Portland, South Portland, and Westbrook.