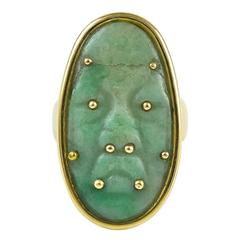 Biography: William Spratling was born in 1900 in Sonyea, New York. In 1917 William Spratling attended Auburn University and a year or two later, during his stay at Auburn served as an instructor in architecture. Spratling moved to New Orleans in 1921 where he was an Associate Professor of Architecture at Tulane University.

Spratling visited Mexico for the first time in 1926. He returned for summers over the next several years, and in 1929, moved to Mexico. In 1931, Spratling hired an experienced goldsmith from Iguala who moved to Taxco and created silver jewelry of Spratlingâs design. Other craftsmen joined Spratlingâs shop and produced tin ware, copper items, textiles and furniture - all designed by Spratling.

Early in 1946, Spratling y Artesanos was out of business due to mismanagement by Spratlingâs partners. Spratling left Taxco and moved to his ranch, never returning to Taxco to live. From then on, Spratling rebuilt his business and had silversmiths fabricating his jewelry and object designs at his ranch. His designs were also produced by the Conquistador Company in Mexico City for a couple of years.

William Spratling was killed on August 7, 1967 in an automobile accident just outside Taxco. Throughout Mexico he is acknowledged as "The Father of Mexican Silver."