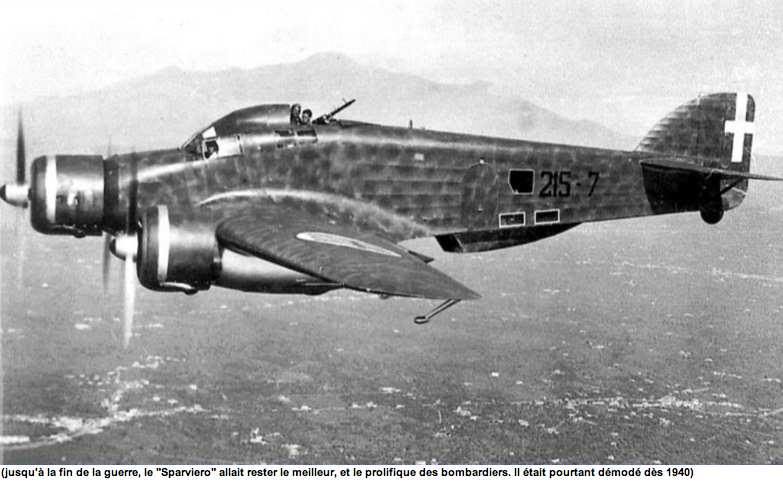 
History: The Savoia-Marchetti SM.79 Sparviero (Italian for sparrowhawk) was a three-engined Italian medium bomber developed and manufactured by aviation company Savoia-Marchetti. It could be the best-known Italian aeroplane of the Second World War. The SM.79 was easily recognizable due to its distinctive fuselage dorsal "hump", and was reportedly well liked by its crews, who nicknamed it il gobbo maledetto ("damned hunchback").

The SM.79 had been originally developed during the early 1930s as a cantilever low-wing monoplane employing a combined wood-and-metal structure. It had been designed with the initial intention of producing a swift eight-passenger transport aircraft, capable of besting even the fastest of its contemporaries at that time, however, the project quickly attracted the attention of the Italian government for its potential as an armed combat aircraft. Performing its first flight on 28 September 1934; between 1937 and 1939, early examples of the type established 26 separate world records, qualifying it for some time as being the fastest medium bomber in the world. As such, the SM.79 quickly became regarded as an item of national prestige in Fascist Italy, attracting significant government support and often being deployed as an element of state propaganda. Early on, the aircraft was routinely entered into competitive fly-offs and air races, seeking to capitalise on its advantages, and often emerged victorious in such contests.

SIAI-Marchetti was an Italian aircraft manufacturer. The original company was founded in 1915 as SIAI (SocietÃ  Idrovolanti Alta Italia - Seaplane company of Northern Italy). After World War I it gained the name Savoia, when it acquired the SocietÃ  Anonima Costruzioni Aeronautiche Savoia, an Italian aircraft company founded by Umberto Savoia in 1915.

The name Marchetti was added when chief designer Alessandro Marchetti joined the company in 1922. Savoia-Marchetti gained prominence with the successful S.55 flying boat. Savoia-Marchetti became famous for its flying boats and seaplanes, which set numerous endurance and speed records. Favoured by Air Marshal Italo Balbo, the company began rapidly prototyping and developing a number of other aircraft, increasingly focusing on warplanes in the lead-up to World War II. However, most of S.M.'s manufacturing capabilities were destroyed in World War Two. It was renamed SIAI-Marchetti in 1943.

SIAI-Marchetti only survived in postwar Italy by building trucks and railway equipment.[citation needed] However it still struggled with insolvency for six years after the war before declaring bankruptcy in September 1951, with all staff being dismissed, although more than half were re-employed by the liquidator to complete existing orders. In 1953, the company reopened. It began to focus increasingly on helicopters in the 1970s and was eventually purchased by the aerospace firm Agusta in 1983.