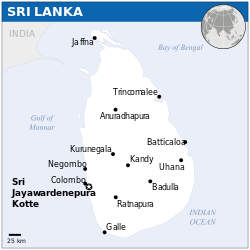 
Brief History: Democratic Socialist Republic of Sri Lanka, is an island country in South Asia, located in the Indian Ocean to the southwest of the Bay of Bengal and to the southeast of the Arabian Sea. It is separated from the Indian subcontinent by the Gulf of Mannar and the Palk Strait. The legislative capital, Sri Jayawardenepura Kotte, is a suburb of the commercial capital and largest city, Colombo.
Sri Lanka was known from the beginning of British colonial rule as Ceylon (/sÉªËlÉn/, US also /seÉª-/). A nationalist political movement arose in the country in the early 20th century to obtain political independence, which was granted in 1948; the country became a republic and adopted its current name in 1972.