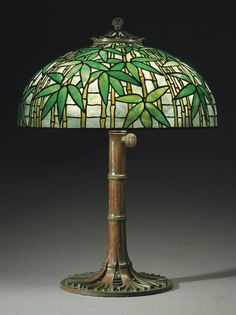 
Long Description: The bamboo leaf design on this shade is scattered among the bamboo vines on a white background. The color varies from a yellow-green to a dark green in the leaves. The green coloring is streaked with brown, dulling the leaves while others are a vibrant green. The fibrillated glass adds a lifelike quality to the repeating pattern.