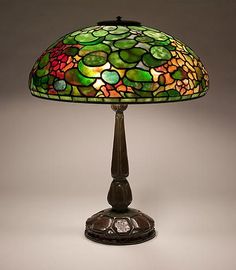 
Long Description: The Nasturtium shade design is decorated with the five petal blossom in a red tone with streaks of pink and green glass leaves mottled with yellow. The lower border is constructed of a geometric row of yellow green mottled glass.