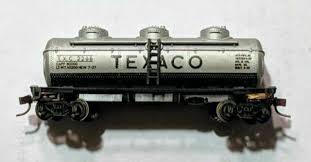 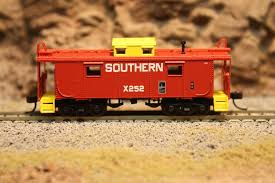 
Model Information: This model was produced by Roco for Atlas starting in 1967. It shares the same underframe with the single dome model. It was copied by Mehano for import by Atlas' competitors but that is a different tooling. Unfortunately, the Mehano copy is similar enough it can be hard to tell the two apart. However, the Atlas/Roco models have "Atlas Austria" stamped into the underframe while the Yugoslavian copies say "Made in Yugoslavia".

As far as we know the Roco model was never imported by any firm other than Atlas. My guess is that the Mehano copy was of similar quality and at a lower price point (Yugoslavian labor being cheaper than Austrian labor in the 1960s and 1970s). Both models have Rapido couplers and blackened metal wheels. Unlike many of the Roco produced trucks, the ones on the model we examined seem to operate fairly smoothly.

This model (like most N Scale models of 3-Dome tank cars) is horribly inaccurate. The dimensions of the model do not resemble at all the dimensions of the typical 3-dome prototype. The real cars were skinnier and had capacity of between 4K and 5k gallons, where this model appears to have a capacity of more than double that. Perhaps there were some 3-domes out there that looked like this model, but I have never seen a photo of one...

Triple Dome tank cars, while not as common as single-domes, are a railroad staple. They have been around since the first half of the 20th century.

The dome above tank cars serves as an expansion chamber as temperature affects the volume of any liquids contained within. With no dome, if the liquid did not 100% fill the tank, then it is possible for the liquid to slosh around inside the tank, causing instability and increasing the possibility of a derailment. The dome allows the tank to be slightly overfilled so that should the volume in the main section decrease due to colder temperatures or even a small leak, that there will still be sufficient liquid within to prevent sloshing. Similarly if temperature increases, the liquid can rise up inside the dome preventing excess pressure within the tank. While not as serious as an underfilled tank, an over-pressurized tank might present problems during unloading.

If you see three domes on a tank car it is because there are three separate compartments inside the tank car each containing a different liquid. This was desirable for many reasons.

Often times a delivery would consist of much less than a carload (LCL) of liquid. Remember the sloshing problem? So if you only had to fill a third of a tank with your commodity, then you can avoid the issue by using one of the three chambers within the tank car. Also, you might have several grades of a commodity to deliver such as unleaded, leaded and diesel fuel and you need them to be kept separate. Or you might be producing wine and you want your white wine kept separate from your red wine. Or maybe all three chambers had the same contents but were being delivered to three different customers. It can be very difficult to determine when one third of a single dome tank car has been discharged...

For all these reasons, three-dome tank cars were a common sight in the first half of the 20th century. However, with the rise of the interstate highway system and the modern trucking industry, LCL deliveries have primarily been accomplished with tanker trucks instead of tank cars and the three-dome tank car has gradually disappeared from the North American rail network.