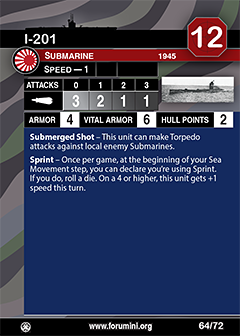 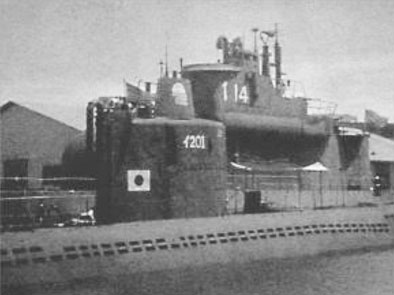 I-201 displaced 1,291 tons surfaced and 1,451 tons submerged. It had a test depth of 360 feet (110 m). Armament consisted of four 53 cm (21 in) torpedo tubes and 10 Type 95 torpedoes. The two 25 mm anti-aircraft guns were housed in retractable mounts to maintain streamlining. The submarine was designed for mass production, with large sections prefabricated in factories and transported to the slip for final assembly.

I-201 was seized and inspected by the US Navy at the end of the hostilities. It was part of a group of four captured submarines, including the giant I-400 and I-401, which were sailed to Hawaii by US Navy technicians for further inspection.

The US Navy decided to scuttle these captured Japanese submarines to prevent the technology from falling into the hands of the Soviet Union. On 23 May 1946, I-201 was torpedoed and sunk by USS Queenfish. The Hawaii Undersea Research Laboratory found the wreck of the I-201 near Hawaii using submersible craft in 2009

The I-201-class submarines were submarines of the Imperial Japanese Navy during World War II. These submarines were of advanced design, built for high underwater speed, and were known as Sentaka-Dai type submarine or Sentaka type submarine. They were one of the fastest submarine class built during World War II, second only to Walter Type XVII closed-cycle powered submarines. Twenty-three units were ordered from the Kure Navy Yard under the 1943 construction program. Due to the deteriorating war situation, only eight boats were laid down, and only three, numbered I-201, I-202 and I-203, were completed before the end of the war. None of them saw operational use.