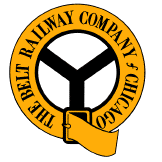 The Belt Railway Company of Chicago (reporting mark BRC), headquartered in Bedford Park, IL, is the largest switching terminal railroad in the United States, employing approximately 450 people.. It is co-owned by six Class I railroads - BNSF Railway, Canadian National Railway, Canadian Pacific Railway, CSX Transportation, Norfolk Southern Railway, and Union Pacific Railroad - each of which uses the switching and interchange facilities of the BRC. Owner lines and other railroads bring their trains to the Belt Railway to be separated, classified, and re-blocked into new trains for departure. The BRC also provides rail terminal services to approximately 100 local manufacturing industries.

The Belt has 28 miles of mainline route with more than 300 miles of switching tracks, allowing it to interchange with every railroad serving the Chicago rail hub. The Belt's Clearing Yards span a 5.5 mile distance among 786 acres, supporting more than 250 miles of track.