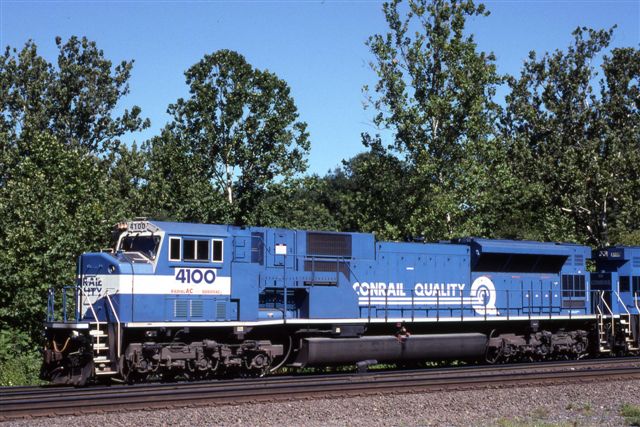 The SD80MAC is a 5,000 horsepower (3.7 MW) C-C diesel-electric locomotive. The model uses a 20-cylinder version of EMD's 710G prime mover, and is the first diesel locomotive to use a 20-cylinder engine since EMD's SD45 and SD45-2. It introduced a wide radiator housing similar to GE Transportation locomotives and the placement of dynamic brakes at the rear of the locomotive, which is a quieter location, features that were incorporated into the SD90MAC and SD70ACe models. Key spotting difference between the SD80MAC and SD90MAC include no external rear sandbox on the SD90MAC, rear number boards, and the placement of the front numberboards (above the cab windows on the SD80MAC, on the nose on most SD90MACs). The SD80MAC also has recessed red marker lights in the nose, an identifying feature unique to Conrail locomotives, although Norfolk Southern (NS) has removed the lights on most of their former Conrail engines.
A total of 30 SD80MAC units were built and delivered to Conrail.