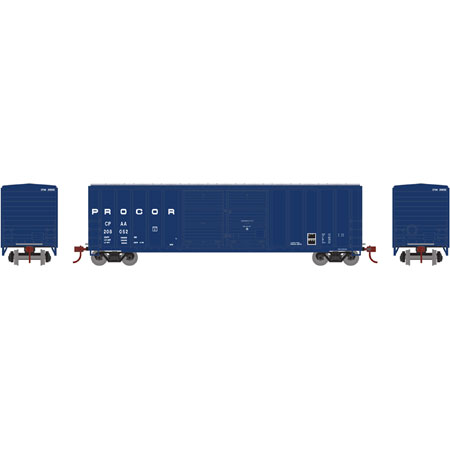 Model Information: Boxcar, 50 Foot, Double Sliding Door, Rib Side, Without Roofwalk, FMC. This body style was acquired by Athearn from MDC Roundhouse in June of 2004.

Procor is a Canadian company producing railway shipping cars. It is Canada's largest private rail car rental fleet, with more than 21,000 conventional and special-purpose tank and freight cars. Linked to Sparling Tank Car of Toronto, Procor was founded in 1952 as Products Tank Line Limited and became an affiliate of US-based Union Tank Car Company. Within a few years they had become a major player in Canadian tank car operations through the acquisition of the Transit Co./Imperial Oil fleet in 1955, along with a number of smaller operators such as Canadian Industries Ltd. circa late 1956. The company, which shortened its name to Procor in 1962, is headquartered in Oakville, Ontario.