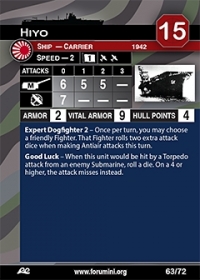 History: Hiei (æ¯å¡) was a warship of the Imperial Japanese Navy during World War I and World War II. Designed by British naval architect George Thurston, she was the second launched of four KongÅ-class battlecruisers, among the most heavily armed ships in any navy when built. Laid down in 1911 at the Yokosuka Naval Arsenal, Hiei was formally commissioned in 1914. She patrolled off the Chinese coast on several occasions during World War I, and helped with rescue efforts following the 1923 Great KantÅ earthquake.