Model Information: Introduced in October 1998, with a second run in 2007.
Walthers ready-to-run 45 Foot Logging Flat Cars feature a die-cast body, styrene details, free-rolling trucks and standard (Rapido) couplers - Accumate couplers for the second run.
Models were available in three-packs ($26.98) or as singles with a fourth road number ($8.98), in six road names and undecorated. In the second run, models were available as single ($10.98) or in two-packs ($21.98).

Re-run under Atlas brand in 2019 after Atlas purchased the tooling from Walthers.

Here is how Walthers described them:
The 45 Foot Logging Flat Car is the trademark of logging railroads. Based on converted flat cars, the cars have four log bunks, a center sill, and a partially open deck. Some logging railroads ran entire trains of such cars.
Walthers advertised concurrently its Mountain Lumber Company Sawmill (933-3236), with these words "Long trainloads of these cars will look great arriving at Mountain Lumber Company Sawmill, also available in October". 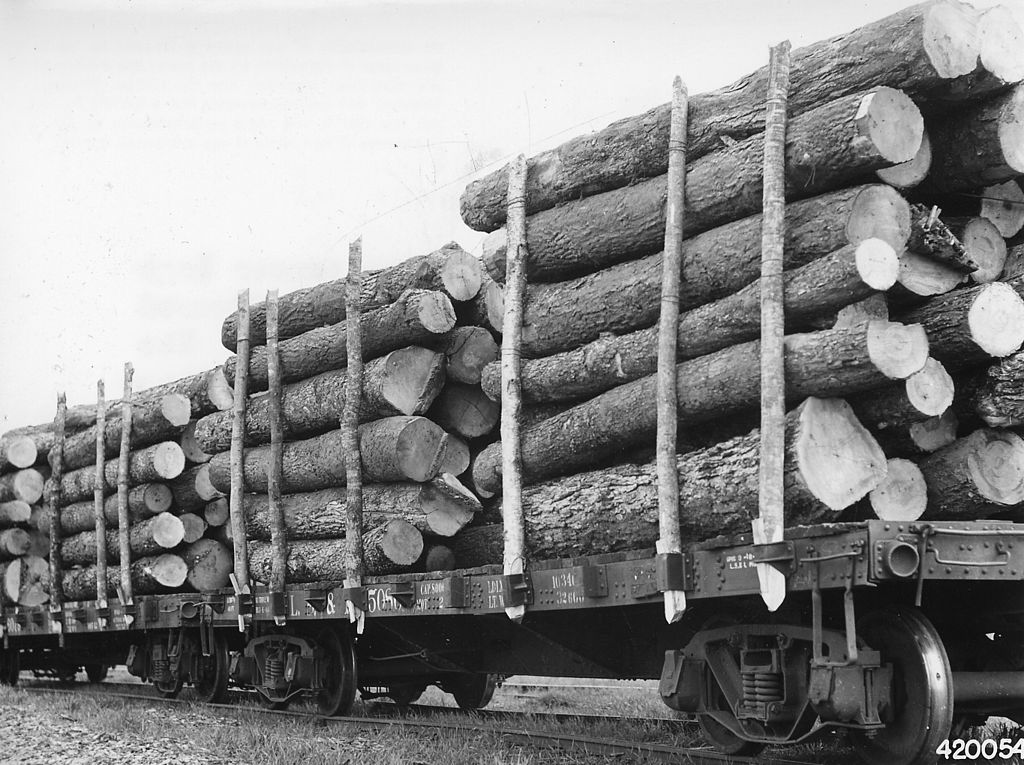 Among the earliest types of freight cars, flatcars continue to serve as a valuable part of railroading. Flatcars are used to move a wide variety of loads which do not require protection from weather. These cars, are constructed with steel underframes, wood floors and stake pockets on the sides and ends for fastening tie-downs that keep loads from shifting.

Logging flat cars are a specialized type of flatcar converted to carry logs, with the addition of log bunks or upright stake posts secured in stake-pockets available on the side of the flatcar.

BC Rail (reporting mark BCOL, BCIT), known as the British Columbia Railway between 1972 and 1984 and as the Pacific Great Eastern Railway (PGE) before 1972, was a railway that operated in the Canadian province of British Columbia between 1912 and 2004. It was a class II regional railway and the third-largest in Canada, operating 2,320 km (1,440 mi) of mainline track. Its operations were owned by the public as a crown corporation from 1918 until 2004, when the provincial government leased operations for 999 years to CN. The track and other assets, including a marine division and stevedoring subsidiary as well as large tracts of real estate, remain under public ownership. 40 km of track serving the Roberts Bank Superport that were scheduled to be sold to OmniTRAX remain under BC Rail management due to that sale being cancelled because of the transaction being tainted by an influence-peddling and bribery scandal resulting in convictions in 2010. The provincial government, which promised when originally elected to never sell the railway, has announced that the crown corporation and its remaining operations and assets would be "wound down" and taken over by various departments of the Ministry of Transportation The details of the sale/lease to CN, which are related to the OmniTRAX affair, have become the subject of protracted public inquiry as part of the proceedings of the trial surrounding a scandal known as the British Columbia Legislature Raids Affair, or "Railgate". Government leaders and civil servants involved with the arrangements to CN have refused to comment on the deal because the matter "is before the courts".

Chartered in 1912, the railway was acquired by the provincial government in 1918 after running into financial difficulties. A railway that ran "from nowhere, to nowhere" for over 30 years, neither passing through any major city nor interchanging with any other railway, its southern terminus was at Squamish and its northern terminus at Quesnel during that period. It expanded significantly between 1949 and 1984. Primarily a freight railway, it also offered passenger service, as well as some excursion services, most notably the Royal Hudson excursion train. The railway's operations only reached profitability in 1980, due to large capital and operating debts, which were intended as subsidies to develop and sustain mining and timber economies and employment in the regions it accessed, though during the 1980s it regularly posted significant profits, contributing to the public treasury significantly, and maintained a lower operating debt than any of the continent's other major railways. The railway's operations and management, as one of the province's largest crown corporations, have necessarily been at the centre of public debate since its takeover. Notably, as example, the Social Credit governments of WAC Bennett and his son Bill Bennett forgave the railways' capital debts in 1954 and 1979, respectively, with bookkeeping matters related to that bringing much criticism. The current provincial government has been accused of fabricating falsehoods about the state of its debts and viability in order to justify the deal with CN, claiming the railway was in disarray. Other participants in the bidding process withdrew their bids, saying that CN had unfair access to confidential information about their own operations, provided by the government, and at least one bidder (Canadian Pacific) privately stated in since-released communications that the bid was "rigged". Controversy over CN's management of the line has focused on layoffs, toxic spills and other safety concerns, and cuts in service to some regions. The line has generated profits for CN in the range of $25 million per year since its takeover of the railway's operations.