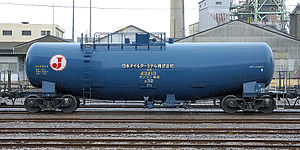 History: JNR Taki 43000 (Kokutetsu Taki 43000) is a gasoline-only freight car (tank car) manufactured from 1967. It is a privately owned freight car owned by Japan Oil Terminal or Japan Oil Transportation, and has been incorporated into the Japan National Railway (JNR) initially, and after the privatization of JNR in 1987, it has been registered on the Japan Freight Railway (JR Freight).
This description also applies to the Taki 44000, a dedicated tanker for petroleum products, manufactured simultaneously with the same body structure.