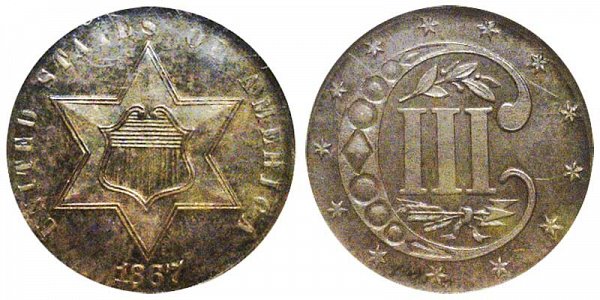 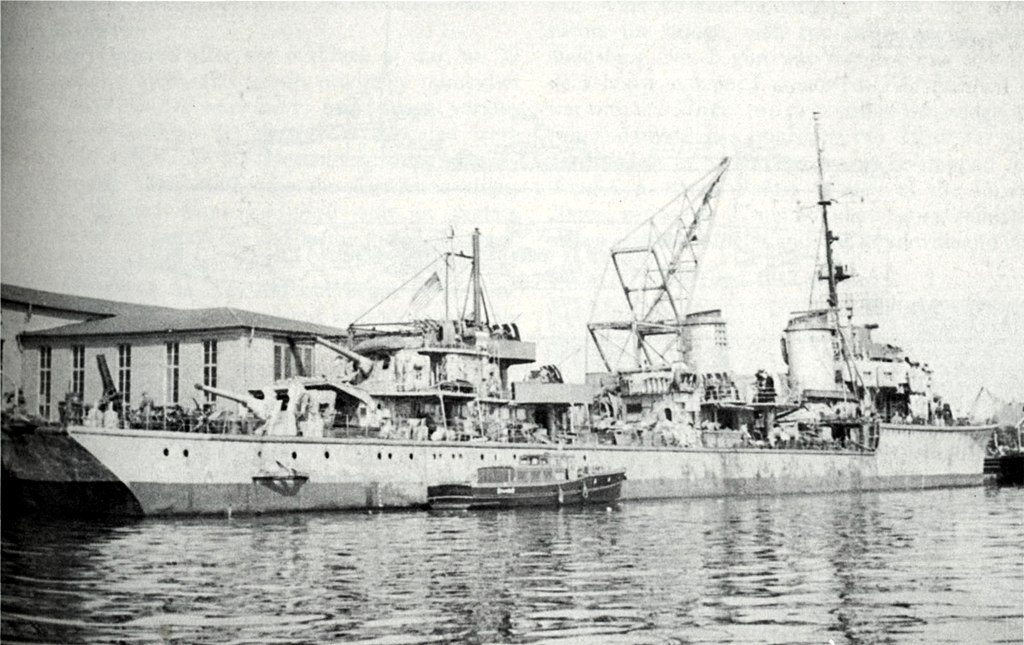 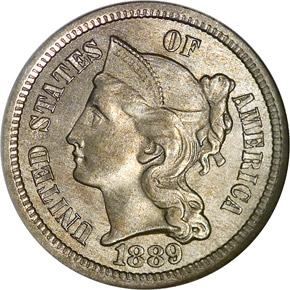 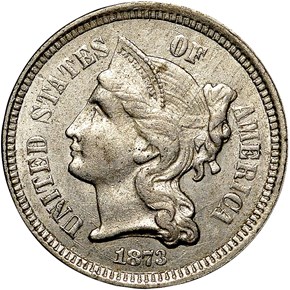 The three cent coin has an unusual history. It was proposed in 1851 both as a result of the decrease in postage rates from five cents to three and to answer the need for a small-denomination, easy-to-handle coin. The three cent silver featured a shield on a six sided star on the obverse and the Roman numeral III on the reverse. The coin was initially composed of 75 percent silver and 25 percent copper to ensure that the coin would be considered real currency yet not worth melting down for the silver. The coins were physically the lightest weight coins ever minted by the United States, weighing only 4/5 of a gram and with a diameter smaller than a modern dime and only slightly greater than the smallest gold dollars. The silver coins were known as fishscales. The term trimes is often used today for these coins but that was first used by the director of the United States Mint (James Ross Snowden) at the time of their production.

Starting in 1854, the three cent silver had its silver metal content raised to 90% in order to encourage circulation. At the same time, its weight was reduced to 3/4 of a gram by reducing thickness. The coin went through a design change at the time such that two lines were now used to border the star on the obverse and an olive sprig was added above and a bundle of arrows below the Roman numeral III on the reverse. A final design change occurred in 1859 because of striking problems: the number of lines bordering the star was reduced to one, and the font was made taller and slightly more narrow. The size of the date numerals also varied through the years, with 1860â1863 featuring the smallest date numerals of any US coin. In 1851 only, the New Orleans Mint struck some of the silver three-cent coins. It was minted from 1851 to 1873 at the Philadelphia Mint. In the later years there were very small mintages and the 1873 issue was in proof state only, commanding prices upwards of four hundred dollars. However, an earlier date silver three cent piece can be bought in worn condition for a relatively low price. The silver three cent pieces can be purchased for around twenty-five dollars if they are in decent shape and before 1862, depending on the mintage. The silver three cent piece (along with the silver dollar, the half dime, and the two cent piece) was discontinued by the Coinage Act of 1873.