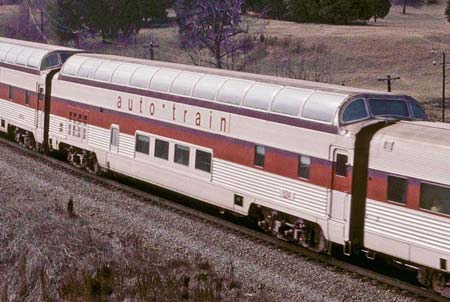 Budd was well known for their corrugated cars (for which they held a patent). When Burlington inaugurated its vista-domed Kansas City and American Royal Zephyrs on the Chicago-Kansas City route, the Santa Fe responded by ordering full-length domes for several trains serving the same route. Although Pullman, which manufactured the Milwaukee Super Domes, proposed to make similar cars for the Santa Fe, the railroad turned instead to Budd to build its âBig Domes.â

Other than being fluted stainless steel rather than painted, the Big Domes superficially appear almost identical to Milwaukeeâs Super Domes, but a close look reveals several differences. Upstairs, rather than arrange all the seats in coach formation, the rear part of the car had 18 lounge seats allowing for parties of three to eight to sit together. With the 57 coach-like seats, the dome had total seating for 75 (as opposed to 68 in the Super Domes)âmore than three domes of the Kansas City Zephyr and American Royal Zephyr combined.