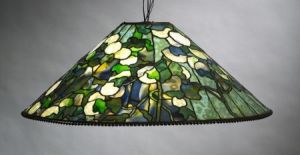 
Long Description: The leaves on the Hydrangea shade are a vibrant green streaked with yellow tones with white blossoms. The background is a gray-green with blue highlights. The harmonious contrast in the shade makes it one of the most famous Hydrangea patterns from Tiffany.