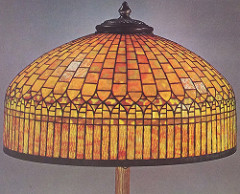 
Long Description: The standard globe shade curves downward in an umbrella like fashion with a straight apron making the shade 10" deep. The shade's vertical rows of glass pieces to not line up creating an interwoven design while the apron consists of simple vertical pieces.