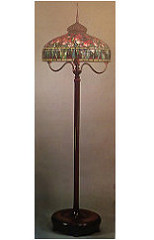 
Long Description: Rare floor base with arms, possibly a special order. The three arms are of a curved S shape and gracefully connect to the rim of the shade with leaflike prongs. The platform and stem are finished in dark bronze with a plain round style, the shape similar to the standard large floor base.The top of the shade is adorned with a swirl finial.