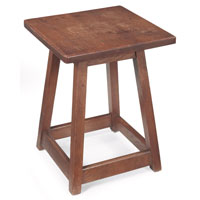 Stools can be entirely comprised of wood or have pads which are upholstered in leather and secured with nails or tacks. The proportion and unornamented form clearly illustrates the mission style influence and durability for use.