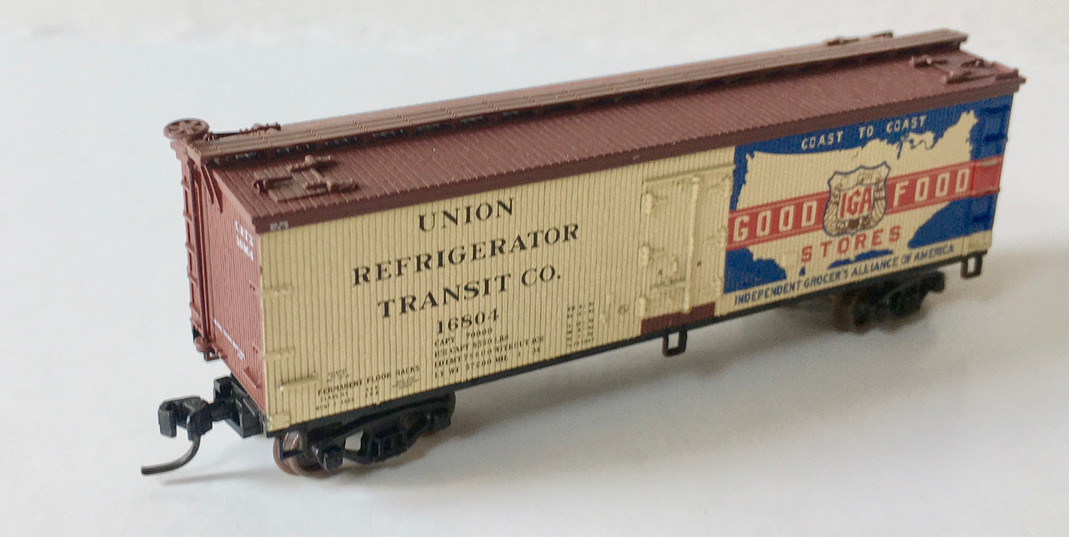 A favorite among those that model pre-WWII North America is the 40â Wooden Billboard Reefer railcar. These boldly painted rolling stock cars at one time dominated the tracks with their splashy advertisements and elegant artwork. This review visits the demise of the billboard reefer as we take a look at the Atlas Master Line IGA Food Store model. Atlas Model Railroad has released 17 different series of billboard cars since 2002 with their next collection of 15 different road names scheduled to be available at hobby stores the 1st quarter of 2021. This line of Atlas reefers are patterned after the Pullman built Northern Refrigerator cars of the 1930âs.

The May 2002 Series includes six different paint schemes. The road names represented in this collection include: Two different road numbers are assigned for each rail line.

The suggested retail price was $16.95

Three seemingly innocent words whose definitions can be found with a quick Internet search, but once put together opened a world of opportunity for manufactures and eventually a bag full of trouble for the railroads.

Always looking for an opportunity, the businessman of the 1800âs began using railcars to spread his word by simply placing paper advertisements in wooden frames nailed to the sides of boxcars. This practice evolved into the yellow URTX wooden reefers of the 1920âs with their âbillboardâ paint schemes. These rolling billboard advertisements were applied to the sides of privately owned or leased railcars to call attention to their products or services.

The style of the advertisements varied â from the product name simply spelled out in large letters to elaborate multiple color pieces of artwork. There were no limits to the beauty and cleverness of these decorated reefersâ¦ long strings of brightly painted railcars traveling hundreds of miles across state lines showcasing the shipperâs product. The shipper and public benefitted from this opportunity yet the railroads seemed to have failed in reaping any reward from this arrangement.

In 1887 the Interstate Commerce Commission (ICC) was signed into law by President Grover Cleveland with the main purpose to regulate American railroads. The ICC was designed to ensure fair rates, eliminate rate discrimination and oversee the practices of interstate bus lines, trucking companies and telephone communications. There was widespread animosity and mistrust towards the railroads because of their economic and political powers and the ICC setout to eliminate these perceived abuses. The ICC was abolished with the Termination Act of 1995 with all railroad matters transferred to the newly formed U.S. Surface Transportation Board (STB).

Furthermore, the railroads maintained their own fleet of cars for use during peak traffic periods or for shippers without lease agreements. These railcars sat idle and didnât reach their revenue earning potential when the railroads serviced privately owned and leased equipment provided by shipper.

Another issue during the âBillboardâ Era was the refusal of Company Y to ship their products in a reefer painted for Company Z. The ICC allowed for a manufacture to refuse shipping goods in a railcar with advertising for another. The railroad was often forced to haul an empty car back to the shipper, which created more expense and less revenue for the railroads.

Thus in 1934 the railroads werenât distressed when the ICC passed Regulation #201.

Briefly, the ICC ruled that billboard railcars were an illegal rebate to the lessee:

âThe purpose of the amendments is to prevent the practice that has been growing in recent years by which private and railroad controlled car lines have been bidding against each other to place cars in the exclusive service of shippers at reduced rentals, thus displacing the use of railroad-owned refrigerator cars, and enabling the shippers to profit from the mileage earnings of the cars. Such allowances, the commission finds, are unlawful rebates and concessions."

âOn and after the effective date of this ruling [August 1, 1934] advertisements of shippers or products are prohibited on newly constructed or repainted refrigerator cars."

"Effective January 1, 1937*, no refrigerator cars bearing advertisements of any shipper, consignee, or product, will be accepted in interchange or handled locally on any railroad." â ICC Ruling Excerpt

The ruling further stated that the lesseeâs name could not be painted any taller than 12â. This ruling made it less attractive to lease a railcar if it couldnât be transformed into a rolling billboard, thus more of the railroad owned fleet of reefers hit the tracks.

*The Effective date was extended to January 1, 1938 to allow existing railcars to be repainted during routine maintenance.

There were some exceptions to the rule for privately owned cars. In short, if the shipper owned the railcar and used it to haul their own products, the shipper was allowed to place their logo on the car. Any non-railroad owned cars have a reporting mark that ends in the letter âXâ. This explains, for example, the use of Swift Refrigerator Line (SRLX) labeled cars well into the 1960âs.

The IGA reefer arrived in the familiar clear jewel plastic case with a slip-off cover and a hard one- piece plastic cradle to cushion the car. The model information is clearly labeled on the end of the case for ease to locate when in storage. All of the detail pieces were either attached or molded onto the model with no additional pieces in the case.

At first glance, the reefer car is a striking model - the eye-catching red and blue IGA Good Food Stores emblem against an antique white wooden reefer car. IGA was founded in May of 1926 when over 100 independent retailers in New York and Connecticut joined together to share in the rewards of group marketing and access to a consistent supply chain. In 1930, over 8,000 food stores were using the IGA company name. IGA, headquartered in Chicago, still exists today with stores throughout the United States and Canada.

I believe the IGA model cars manufactured by various hobby companies to be âfantasyâ designs. I have found no photographic or written evidence that the reefer railcar actually existed. With that said, Atlas has used the proper font and lettering placement when compared to other Union Refrigerator Transit Company (URTX) billboard cars from the same time period. The lettering is neat and clean but the smaller printing is difficult to read - even with magnification. The tiny letters appear blurry in some locations, an effect caused by the uneven printing on the wood panels.

The model has an injection molded plastic body with extra fine scale detail. The entire model features a simulated wood grain car-body that gives the appearance of actual wood panels. A superior characteristic not found on multitudes of n scale wooden model cars. I was truly impressed with the meticulous attention focused on the door hinges and latches. These details are usually featured poorly on n scale rolling stock. The sides also include grab irons and a ladder. Lastly, as I find on most N scale models, the three side stirrups are rather chucky-looking but donât distract from the elegance of this model.

Side View
Both ends feature a full height ladder and highly detailed wood grain panels. A mounted high vertical handbrake is located on one end, the same placement as prototype images. Again the lettering on the ends is neat and in the proper arrangement compared to other billboard cars but the print is challenging to read because of the irregular shaped wood planks. 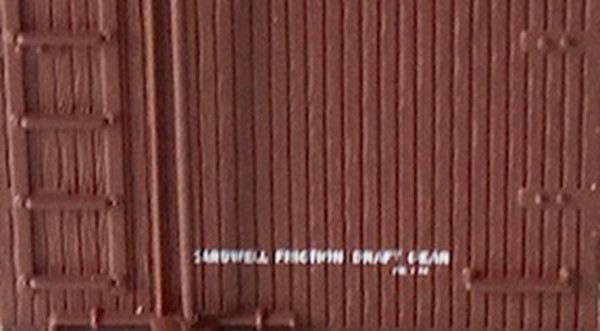 Plank Detail
The top also has wood grain detail, a full-length roof walk and four ice hatches located in each corner of the railcar. The hatches do open but extra care must be given as the hinges holding the hatches to the roof are very delicate and can break easily.

Roof Detail
The USRA fish belly underframe has a fairly basic arrangement with a single cylinder and brake rod. The model features 40-ton friction bearing trucks and brown plastic wheels. The plastic wheels are only one of the few disappointments, as they will be upgraded to metal in the future. The Accumate knuckle couplers were mounted to the proper height on both ends.

Underframe
The car is 3 inches in length and weighs about 0.9 ounces, which is perfect according to the National Model Railroad Association (NMRA) recommendations (which are 0.9 - 1.0 ounces for a three inch car). I found it a good runner while testing the car on Kato Unitrack with no issues around curves or through turnouts at slow and medium speeds.

If you model the pre-WWII era or are just a fan of billboard reefer cars, I highly recommend the Atlas Model Railroad line. The car featured accurate prototypical characteristics, crisp color and extra fine detail work. Itâs also an excellent runner that needed no adjustments to perform smoothly (although it has plastic wheel sets). This line is easily one of my favorites as I have broken ICC rules and have allowed a few to wander on my 1960 layout.

ScottAKoltz became enamored with trains while watching the âGreen & Yellowâ double-decker cars clad with shiny green windows (C&NW) rumble by his childhood house in Chicago. His first train set was the Tyco Bicentennial model in 1976. Always a fan of the railroad, ScottAKoltz is newer to the hobby, active for the last three years (now that all the kids are grown-up!). Furthermore, he is also a collector of railroadiana focusing on lanterns, stock certificates and insulators.
Click Here for all Articles on N Scale Model Trains