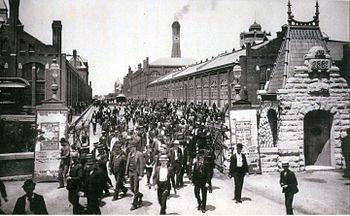 When you think of Pullman, sleeper cars, freight cars, and Pullman Porters come to mind. Well you could add Labor Day, the federal holiday created to celebrate workers and to symbolize support for workersâ rights, to this list as well.

In 1894, the American Railway Union went on strike against the Pullman Palace Car Company. To be sure, workers striking because of low pay, unsafe work conditions and long hours was nothing new during this time period. This particular strike was set in motion when Pullman employees (also members of the Illinois Pullman town, south of Chicago) had their wages cut (due to the Panic of 1893) without a decrease in rent (which was automatically deducted from their pay by the Pullman bank). More than 3,000 workers walked out of the Pullman Palace Car Works plant. In solidarity, their brethren of the American Railway Union (under the leadership of Eugene Debs) joined in the protest and refused to work on trains carrying Pullman cars.

Unlike other strikes of the day, this strike set Americaâs largest industrial union (with more than 150,000 members) against two dozen railroads and all but halted rail traffic in half of the U.S. Similar to other strikes, armed troops were sent in to intimidate and dispel protesters. In this instance, many strikers were wounded and more than a dozen were killed.

As a peace offering to the Railway union workers, and as an election-year concession, in 1894 President Grover Cleveland established Labor Day as a national holiday (several states including New York and New Jersey had celebrated this holiday beginning in 1887).
Click Here for all Articles on Transportation Companies