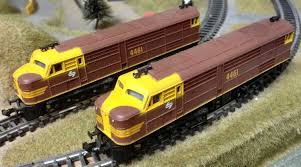 I've just added to the database the IbertrÃ©n Alco DL-500-C series, which IbertrÃ©n started to introduced as Spanish Serie 1800 (now known as 318). They then released it under an Australian livery, that is known as NSWGR 44 class, and eventually they released two fantasy liveries, one Amtrak and one CN. Alco DL-500 was never delivered to North American railways. This is a C-C derivative of Alco FPA series, for export markets.

These models, introduced circa 1980, have a pretty strange mechanism.

Here is what spookshow.net says about it:
The frame consists of one piece of cast metal (contoured to follow the shape of the shell). The motor is attached to the rear truck and swivels right along with it on curves. All of the wheels on the rear truck are equipped with traction tires, so consequently all pick-up comes from the six wheels on the forward truck (with current ferried around via wires). The headlight is, amazingly enough, directional. Performance is not great. It's quite loud and pickup is iffy (not surprising, given all the traction tires).

In Spain, Renfe ordered several versions of the Alco DL-500:

Click here for an image gallery of RENFE Serie 318