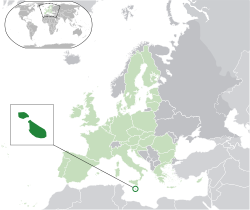 Brief History: Malta became a British colony in 1815, serving as a way station for ships and the headquarters for the British Mediterranean Fleet.
The country became a republic in 1974. It has been a member state of the Commonwealth of Nations and the United Nations since independence, and joined the European Union in 2004; it became part of the eurozone monetary union in 2008.