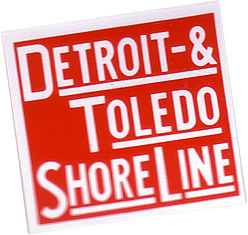 The D&TS was built just after the turn of the 20th Century, originally as a fast interurban line connecting Toledo with Detroit. With construction well underway (about 3/4 of the way to Detroit) and some of the trolley wire up, the backers started to run out of money and sold the line to Grand Trunk Western and The Clover Leaf Route, with each getting half. This would give GTW (which blanketed southern Michigan) a friendly connection to the rail hubs at Toledo. The Clover Leaf (officially the Toledo St. Louis & Western) got a friendly connection to Detroit. The trolley wire came down and the track was upgraded to GTW standards. From then on, Detroit & Toledo Shore Line was a multi-track 59 mile speedway for freight. Ironically for a line conceived as an interurban, the D&TS never offered passenger service. Later, they would adopt the motto, âExpressway for Industry.â In 1923, the Nickel Plate Road merged the Clover Leaf and took over their half of the D&TS.

In the steam era, about 30 locomotives were required to run the line. 2-8-2âs and 2-8-0âs handled the road traffic while USRA 0-8-0âs and some smaller switchers worked the yards. The D&TS dieselized in the early 50s with just three EMD models, SW7s and SW9s for switching and GP7s for road service. The 1953 batch of geeps was the last locomotives bought by the railroad! These were delivered in a yellow-over-blue paint scheme. The narrowly focused roster made the shop crews experts at getting the most from the fleet and keeping them running for the next three decades.

D&TS trains routinely ran north past Detroit and into Flint on GTW tracks, while GTW trains ran south all the way to the Toledo Terminal loop. After the 1964 N&W-Nickel Plate-Wabash merger, N&W had a better line west out of Detroit on the former Wabash rather than using the D&TS and the old Clover Leaf (which had been built on the cheap.) From then on, the D&TS became much more important to the GTW than to the N&W. In 1981, N&W finally sold their half to the Grand Trunk Western and the Detroit & Toledo Shore Line was merged into the GTW.