Originally revealed at Trainfest in November of 2012, Fox Valley Models of Des Plaines, Illinois introduced during the Fall of 2012 The Milwaukee Road Transfer Caboose into their HO & N Scale Rolling Stock Series.

The series included eight different paint schemes. The variations represented in this collection include: Several different road numbers were assigned for each paint scheme. The suggested retail price was $38.95 but can be found at a discount through Fox Valley Models (shopfvm.com) or traditional hobby outlets.

As interchange transfer traffic increased at major terminals during the 1920âs, a specially designed caboose was required for transfer runs between rail yards or short switching jobs. Entire trains were interchanged during these transfer runs and these tasks required its own caboose. During the early years, railroads used either active road cabooses or older cabooses that had been retired from mainline service. But demand grew for more of these specialized cars to free-up regular road cabooses for mainline work.

Union Pacific records show that as early as 1930 that eight specifically designed transfer cabooses were built at their Omaha, Nebraska shop using retired steel underframe wooden boxcars. These terminal cabooses were 24 feet long and did not have a cupola. Since these newly designed transfer cars were mostly used for moves between local yards the same degree of visibility was not warranted as regular road jobs, thus the elimination of the cupola and bay windows. Also with future Federal Railroad Administration (FRA) sanctions requiring shatterproof windows, railroads found it more economical to plate over the caboose windows rather than replacing the old glass. Caboose windows were tempting moving targets for the trackside rock-thrower.

In general terms, a transfer caboose resembles a flat car with a shed affixed to the middle of its deck. The transfer caboose provided large decks on either side to assist with yard duties. Most of this rolling stock was âhome-madeâ by the railroads themselves using whatever materials were available. This included old freight frames, boxcar panels and in The Milwaukee Road case - the frames from retired steam locomotive tenders (the cars hauled by steam engines that carried its fuel and water). Furthermore, because the transfer caboose was used for cross-town runs, it lacked the basic amenities found on the standard caboose. Sleeping quarters, cooking equipment and bathrooms were excluded. The transfer caboose provided basic shelter for the crew along with perhaps storage facilities, a toolbox and/or a desk.

It has been recorded that The Milwaukee Road repurposed 46 steam locomotive tender frames into terminal cabooses. Most used the original tender trucks - depending from which series locomotive the tender was created - the caboose had either 33â or 36â wheels.

I believe the Fox Valley Models caboose #021 I am reviewing was created using the tender from a class L3 USRA Heavy 2-8-2 Mikado steam locomotive. The American Locomotive Company (ALCO) built the L3 in 1918. The first of the L3s began to be withdrawn from service in 1938 with all engines removed and/or scrapped by 1956. These tenders had a capacity of 10,000 gallons of water and 16 tons of coal, thus this series of caboose was heavier than earlier designs. The heavy-duty frames withstood the constant abuse that was part of their duty.

According to The Milwaukee Road historical records, although a great deal of their assets was either sold or scrapped after the 1977 bankruptcy, some of these terminal cabooses survived until the Soo Line merger in January 1986. Thus with the combination of Milwaukee Road inventory and Soo Line rolling stock, there were enough regular cabooses to handle the switching and yard work, thus signaling the end of The Milwaukee Road transfer caboose. 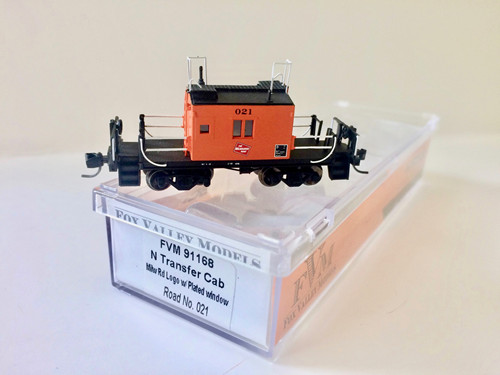 The Model and Box

Although Fox Valley Models (FVM) originally released The Milwaukee Road transfer caboose line in the Third Quarter of 2013, I just recently acquired this piece of rolling stock. The model arrived in a clear jewel plastic case with a slip-off cover and a two-piece plastic cradle to cushion the car. A thin plastic sleeve was wrapped around the car to safeguard the extraordinary print job and delicate metalwork assembled on this model. All of the detail pieces are pre-attached onto the caboose with no additional pieces in the case.

I was intrigued with this unusual looking model as I started to unpack the car from its plastic housing. The paint job is crisp and neat along the entire model with vibrant Milwaukee Road orange grabbing your attention. The lettering, font and placement are exact when compared to prototype images. The familiar red and white âThe Milwaukee Roadâ logo is proudly displayed under the double-windows on both sides. The road number is emblazed in black above each double window in the correct font and size perspective. The lettering is clean and neat, even when magnification is needed for smaller print on the flatcar frame and the date panels on both sides of the car. Furthermore, each side has the correct window configuration as the real life car - large translucent double windows on each side with one side featuring a small plated window.

The model has an injection molded plastic body with extra fine metal details. The top of the car features a metal etched Apex roofwalk and wire railings. The railings are in the proper configuration and correct white color as the prototype. Each end of the roof has a tall railing stand for crewmen to relay hand signals and the prototypical âloopâ railings at the end of each ladder to assist access to the roofwalk.

These wire railings are intricate, fragile detail parts that can bend easily. Precaution is needed when handling the model. Finally the top includes an exhaust pipe and smoke jack for the heating source of the caboose. 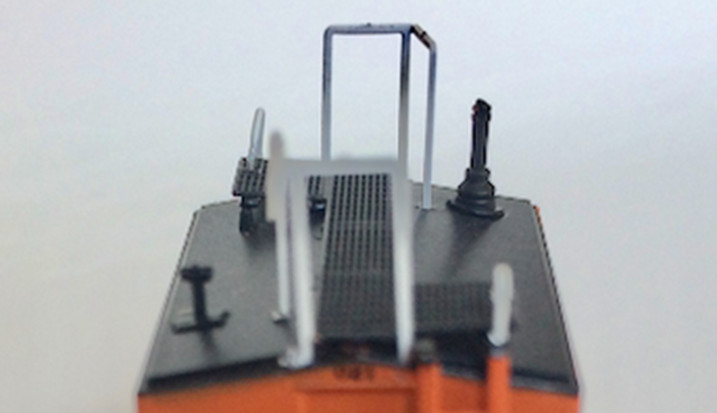 Both ends have an etched platform with correct three-step access to the deck in each corner of the caboose. The platforms are represented with white wire railings, curved wire grab irons and handbrakes. 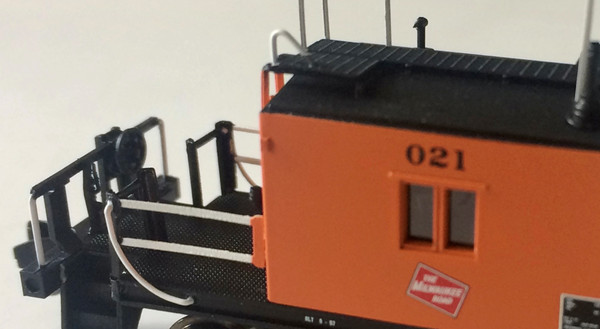 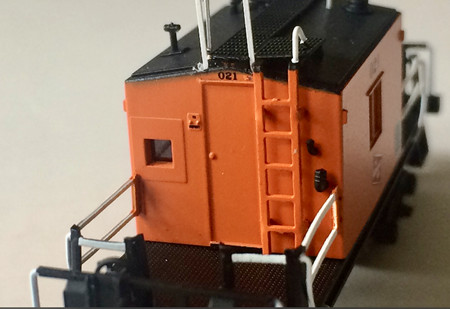 Each end of the cabin features a full height ladder, ladder rungs, a door and small window. All of these components in the proper arrangement as the prototype photograph. High magnification (or incredible eyesight) exposes more super fine detail including various markers, grab irons and pipes. Also window flashings, road number above each door and a âKeep Outâ sign next to one of the cabin entrances. 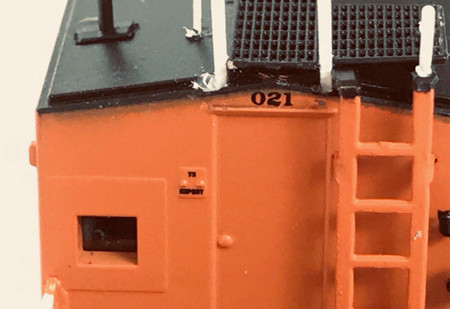 The underframe has a fairly elaborate arrangement for N Scale with a brake cylinder, reservoir and assorted rods & pipes. The model features highly regarded FVM blackened metal wheels and body-mounted knuckle couplers, which were aligned to the proper height on both ends. 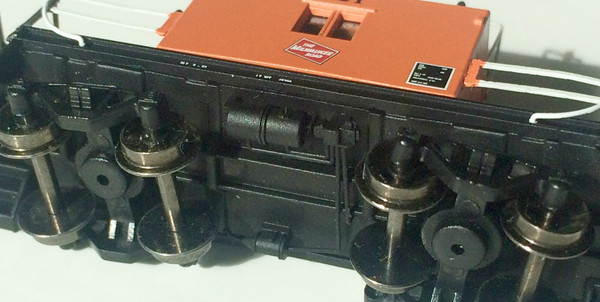 The car weighs about 0.5 ounces and is 2 1/4 inches in length. Not surprisingly light according to the National Model Railroad Association (NMRA) recommendations (which are 0.9 - 1.0 ounces for a 2 1/4 inch car), I found it to run well while test running the car on Kato Unitrack with no issues around curves or through turn-outs although at times I feel the car is being âpulledâ along instead of gliding - perhaps a function of the body mounted couplers.

This is a topnotch release by Fox Valley Models - one of my favorite cars to run on my 1960âs Midwestern Milwaukee Road representation. A highly detailed model that is true to the prototype. Itâs also an excellent runner that needed no adjustments to perform smoothly, but may have its drawbacks for some hobbyists with its light weight and/or fragile metal wire railings. I would highly recommend The Milwaukee Road Transfer Caboose Series to be featured on your 1950âs-1980âs layout as this piece of rolling stock was used by the railroad up until its demise in 1986.

Click here for a link to the entire series

ScottAKoltz became enamored with trains while watching the âGreen & Yellowâ double-decker cars clad with shiny green windows (C&NW) rumble by his childhood house in Chicago. His first train set was the Tyco Bicentennial model in 1976. Always a fan of the railroad, ScottAKoltz is newer to the hobby, active for the last three years (now that all the kids are grown-up!). Furthermore, he is also a collector of railroadiana focusing on lanterns, stock certificates and insulators.
Click Here for all Articles on N Scale Model Trains