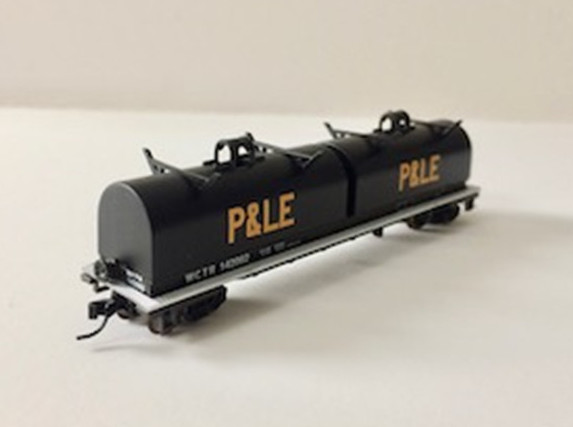 In October 2019, Atlas recently introduced the 48-foot Cushion Coil Car into their Master Line Series. This product is a rerelease of old Walthers tooling from the late 1990s.

The series includes eight paint schemes. The railroads represented in this collection include: Three different road numbers are assigned for each railroad.

During the 1960s, railroad companies were looking for a more efficient method of shipping steel coils, which are used in construction, many home appliances and metal furniture. Traditional boxcars were too cumbersome to load & off-load this cargo, which weighs on average 40,000 pounds and measures 3 to 4 feet wide by 30 feet long and offered low weight capacity. Previously rolls of coiled-steel were generally transported in specially equipped gondola cars. However, gondolas lacked the protection from the weather and the safeguard from dents & scratches.

The rolling stock manufacturer Evans Products of Plymouth, Michigan would arise as one of the pioneers of the steel coil car. Their first design, a 42-foot model, was released in 1964. The newly released Atlas N-Scale coil car is fashioned after the Evans 1967 48-foot prototype. The Pittsburgh and Lake Erie Railroad (P&LE) leased 50 of these cars and the Bessemer and Lake Erie (BLE) leased 10 that year.

These coil cars were built with a 100-ton capacity. A wood trough or a series of troughs ran the length of the car to cradle the load. Barricades could be laid across the trough to prevent a shifting of the load during transport. These coil cars are considered a subtype of the gondola car.

Furthermore, the steel coil cars were fitted with hoods to protect the loads from the elements and shipping damage. Some cars were equipped with a large single hood, but the 1967 Evans model in review was designed with the more common twin-hood arrangement. This Evans car also featured the rounded âbreadboxâ hood scheme. Future models from other builders would also reveal a flat hexagon-shaped protective hood. Each hood had its own lifting point at its center for an overhead crane to remove the covering. Brackets are also affixed to the top of the hoods to allow stacking when in storage.

I read that Evans originally intended for these coil cars to be manually opened and closed with a worker located at the end of the car in a âbreadboxâ action. This would eliminate the need for heavy machinery, speed up the loading process, reduce the need for hood storage space and keep the hoods attached to avoid mismatching when reattached to a coil car. It was reported that mill workers preferred the crane removal method because the breadbox hoods were easily damaged in the steel mills and the hoods would unexpectedly slam shut endangering the laborer. The hoods were converted into the lift-off variety soon after their release. Also today itâs still very common to see mismatched hoods on rolling stock rumbling down the tracks.

After the above aforementioned difficulties, the Pittsburgh & Lake Erie (P&LE) terminated their lease with Evans Products in 1973. Evans removed the hoods and the P&LE purchased a series of these reconfigured cars to transport hot-rolled steel loads, which are rolled coils where surface finish isnât a key concern and protection for the elements isnât necessary. The Bessemer & Lake Erie (BLE) also had their cars configured with the conventional removable hoods and the cars were reported to have been still in use into the early 2000s.

The coil car comes delivered in one of my favorite package designs -- a solid, clear jewel case with a slip-off cover (no struggling with depressing plastic clips). A two-piece formed plastic cradle prevents scuffmarks and shifting. All of the detail pieces are molded onto the model with no additional pieces in the case.

Excellent paint and printing - for a toy!?

The paint job is clean and even along the entire model. One of my complaints is that the hoods look âtoo plastic.â The sheen glaring off the dome of the hood appears âfakeâ and gives a plastic toy appearance. The lettering is sharp and neat, with magnification needed for the smaller printing. The placement and size of all printing is very similar to that found on prototype images.

The model has a die-cast body with two plastic removable hoods and plastic detail parts. The round hoods feature fragile stacking frames and a center-lifting bracket. Extra care is needed to prevent damage to these rather flimsy protrusions. A plastic silver walkway surrounds the hoods and rather chunky-looking stirrups are located on each corner. One of the ends features a die-cast brake wheel. Other than the die-cast body, I see very little improvement from the Walthers 1990s release.

The âremovableâ hoods were nearly impossible to remove. I tried many methods and even asked for advice on social media. Brute force was needed to detach the hoods --four corner posts molded onto the trough hold the hood into place. If I didnât need to detach them for this review, I would not have persisted to remove the hoods. Once removed, a shiny rather phony looking die-cast âwood-linedâ trough floor is exposed. The underside of the body has all the basic molded details.

Finally got them off!

Solid Performance for a Heavy-Runner

The car weighs about 1.3 ounces and is 4 inches in length. Although a little heavy according to the National Model Railroad Association (NMRA )recommendations (which are 1.1 - 1.2 ounces for a four inch car), I found it a good weight while test running the car on Kato Unitrack with no âtippingâ issues with the shape and design of the car. If adding a load onto the troughs, care will be needed not to make the car too heavy. Several model train manufactures produce coil car loads, such as Micro-Trains Line and Bachmann, or you can create your own load with some scrap metal and a little imagination.

Finally, the coil car has Accumate Magnetic Knuckle truck-mounted couplers and plastic wheel sets. All couplers were measured to proper height. I will upgrade to Micro-Trains Line (MTL) metal wheels and couplers in the future. I prefer the performance of the MTL coupler system, believed by many to be the best coupler on the market. I also prefer metal wheels for their âclickety-clackâ sound and their function of keeping a cleaner track exceptionally better than plastic wheels.

I was somewhat disappointed overall in the Master Line Series coil car. I was excited to order this release, but was disenchanted from the unboxing. The paint and lettering job was very clean, but the sheen on the plastic hoods and chucky detail parts made it look like a cheap toy - not a $32.95 model. My frustrations continued with trying to remove the hoods and being rewarded with rather unreal âwoodenâ troughs.

The car did run well but would like to see an upgrade to metal wheels for a topline product. As stated before, I will switch to MTL couplers and metal wheels for added performance. The car is a nice conversation piece as itâs an unusual piece of rolling stock not experienced by the non-railroader. I will do some weathering to the hoods and troughs in the future to alleviate the âtoy shine.â Lastly, it appears not too much was done to improve the Walthers release from the 1990s. The heavy die-cast body is a good start but I think Atlas stumbled after that improvement. If this model was in the Trainman collection (and thus less expensive) my expectations may have not been so high and my disappointment not as much.

ScottAKoltz became enamored with trains while watching the âGreen & Yellowâ double-decker cars clad with shiny green windows (C&NW) rumble by his childhood house in Chicago. His first train set was the Tyco Bicentennial model in 1976. Always a fan of the railroad, ScottAKoltz is newer to the hobby, active for the last three years (now that all the kids are grown-up!). Furthermore, he is also a collector of railroadiana focusing on lanterns, stock certificates and insulators.

Here are all the Cars in this Series listed on TroveStar.
Click Here for all Articles on N Scale Model Trains